The Joys of Wine Making 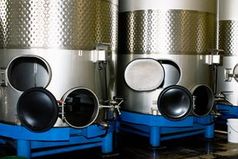 Bud break is upon us and by late summer/early fall harvest of the 2015 vintage will commence. The cooler climates of the southern Willamette Valley tend to be some of the latest to pick in all of Oregon. Some of the warmer pockets of our area, like Pfeiffeir’s winery and Walnut Ridge will be the earliest to be picked. The cooler sites like Brigadoon Wine Co. and Sarver Winery will be some of the last to be harvested.

Upon harvesting the fruit, things tend to move very quickly, from the field to the winery in a few short hours the wine making process begins. In some cases the grapes are loaded whole cluster into the press, in order to capture the freshest unadulterated juice possible. Most red grapes will be destemed and crushed so that the color, tannins, and acids carried by the seeds and skins are incorporated into the wine during fermentation. This initial fermentation is where sugars are converted into alcohol. Co2 is the bi product of this fermentation and causes the seed and skins to rise up and create a cap, if the cap isn’t punched down regularly the yeast will suffocate and fermentation will cease. As the red wine ferments temperatures of 80 to 90 degrees can be reached within the fermenter, for a period of 2-3 weeks.

After the primary fermentation the wine is then pressed and pumped into barrels where a secondary fermentation now takes place. This secondary fermentation is known as the Malolactic fermentation (ML for short). Malolactic yeast is pitched into each barrel where it then begins to convert Malic acid into Lactic acid. Malic acid can be food for foreign bacteria and can create very unpleasant flavors within the wine, while lactic acid is creamy and soft and less capable of being contaminated. Small amounts of Co2 are also created during this process and can be identified by a crackling sound within the barrel. The barrels are kept in a warm space to facilitate a complete Malolactic fermentation. Sulfur is then added to terminate any bacterial growth and the wine is left alone to age. Each month the wine maker tops off the barrels with more wine due to evaporation and concentration of the wine. During barrel aging the wine is “micro-oxygenated” through the pores surface of the vessel; flavor profiles and aromas are created and stabilized by this imperative aspect of barrel aging.  The length of time in the barrel is left up the wine maker, and varies greatly from vintner to vintner. Silvan Ridge’s 2010 Cabernet Sauvignon has been barrel aged for 23 months, where King Estate’s 2013 Pinot Noir only saw 8 months within the barrel.

White wines forego the crushing process to maintain lower volumes of tannin and acid as well as remain clear. The skins are sometimes added back to the juice for a few hours to help add structure and mouth feel. The juice is then fermented in a cold stabilized state in order to control the fermentations speed. The slower and more controlled the fermentation, the better quality, character and flavor of the wine is created. Some white wines will then be treated similar to the reds and undergo a secondary ML fermentation within the barrels. Domaine Meriwether’s 2004 Chardonnay is a great example of wine put through ML and then barrel aged for a short time. Other whites will be transferred into stainless steel tanks where they are cold stabilized to help precipitate tartaric acids and clarify the wine. The sediment that is leftover from fermentation is known as the lees and is often stirred into the wine in order to add mouth feel and texture, this practice is called Sur lie aging. Other agents such as bentonite or sodium bicarbonate are then added to help clarify and de-acidify the wine before filtering and bottling.

There are two types of filtering that are most commonly used in wine making, and each can greatly affect the outcome of a wine as it ages. Plate filtration, is and has been the most commonly used with its wide variety of styles and low cost, it makes for a suitable component for most wineries. Unfortunately, plate filtration is harsh and has a tendency to strip the wine of body and other tactile characteristics; it also creates a large amount of “bottle shock”. Bottle shock is essentially a scrambling of a wine, where flavors and aromas become disjointed and sometimes nonexistent for some time.  Wine makers like Mark Nicholl of William Rose Wines, choose to let the wine rest with a certain amount of oxygen after plate filtration in order to eliminate a certain amount of bottle shock. The second most commonly used filtration is a Cross Flow filter. This is a much gentler process due to the fact that wine is not forced through multiple membranes, but rather passes over a membrane, that has a certain amount of cross flow pressure, to pull out a certain amount of soluble and insoluble matter. Cross flow filters are far more expensive but the results are dramatically better.

Wines can also be bottled unfiltered, though a certain amount of risk is taken when doing so. Unfiltered wines can contain foreign bacteria, or volatile acids (VA) which can harm the wine over time, off flavors and aromas can develop or the wine may become sour due to a high VA. Extensive testing of the wine prior to bottling is necessary to determine whether a wine is stable enough to be bottled this way. If the wine remains clean and healthy and is bottled unfiltered many characteristics of the wine will be exemplified. Body, tannin, mouth feel, and aging potential can be far greater in wines that are left unfiltered.

There are multiple steps that one must carry out during the wine making process and each step taken plays a vital role in the outcome of the final product. Each wine maker develops their own techniques and tricks to make their ideal wine over many years of experience. There are practically an infinite number of possibilities and ways of approaching the process and more techniques come about every year. It’s no wonder that even after thousands of years, the knowledge of wine making continues to grow.  So get out and see some of the variety that the South Willamette Wineries have to offer, it’s fun, and you may just learn few things along your way. Cheers!